Notice: Function add_theme_support( 'html5' ) was called incorrectly. You need to pass an array of types. Please see Debugging in WordPress for more information. (This message was added in version 3.6.1.) in /var/www/wp-includes/functions.php on line 5835

GOD’S LOVE FOR HIS PEOPLE has let our parish family into a new millennium. 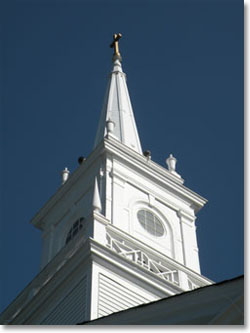 St. Louis de France was born on March 13, 1928 as a national parish. In 1929 a temporary church was built. A rectory was then erected, then a convent-school building followed. The original church, now being used as a hall, was replaced by a more spacious structure in 1951.

“By 1931 Father Prevost and his band of working parishioners had laid the foundation for the parish that now numbers over 1300 families. ”

Rising from a mission chapel of St. Dominic Church Swansea, there began to take the various forms of a newly developing parish. The parish school opened in 1911 in a single-room wooden building. In January 1931, students moved into the new St. Louis de France School with the Sisters of St. Joseph to staff it. At one time the school-convent building housed nine sisters and 200 students. Caught in the whirlwind of change effected by the Second Vatican Council in the 1960’s, the parish family eventually “yielded to the inevitable” and closed the school in June 1971.

During these years, the parish family was guided not only by the hard work of Father Prevost, but also by the experienced administration of Rev. Stanislaus Goyette (1954- 1959) who was a great asset in wiping out the parish debt and rendering the parish solvent. Rt. Rev. Arthur G. Dupuis arrived in the parish on May 20, 1959 and became spiritual leader of the community until his retirement on November 19, 1970. A man of great intelligence and wisdom, Msgr. Dupuis was the only pastor to be elevated as domestic prelate during his spiritual leadership at St. Louis de France, thus bringing a special dignity to our parish family.

Under the pastorate of the enthusiastic Father Louis Boivin, a parish council was formed, holding its first meeting on January 13, 1971. The sanctuary was adapted to the present liturgy. The parish continued to move in conformity with changes in the church while several transformations and additions were being made to various parish buildings. All of this was made possible by the creation of a Bingo game, in 1971, and the rental of the school to the town of Swansea from 1973 to 1991. The crowning gift of Fr. Boivin’s work was the installation of the beautiful stained glass windows in the church. During these years also, with the able pastoral vicars, parish life continued to flourish in various areas of community services, increasing in activities and ministries.

In 1988 Fr. Andre Jussaume became the 5th pastor of the parish. He completed the work begun by his predecessor on the church windows, refreshed the interior of the rectory and encouraged parish leaders to maintain the quality of their service to the parish family. In 1994, Father John Folster, who had already left a great impression as pastoral vicar to the parish family, now returned to take on the challenge of pastoring the community. But his pastorate was short lived since he soon began his journey to the Lord through the ravaging assault of cancer. At that time the parish was ready to look forward to the new hopes and visions of a changing millennium and the celebration of the Holy Year 2000. But the task was not to be his and the parish family gathered to sustain the activities of the church through a very difficult time.

Following the interim administration of Father Gerard Hebert, Father Roger LeDuc was appointed in June of 1996 to succeed as the 7th pastor of the parish. The three years of preparation for the Holy Year were commenced. New efforts were made to help stabilize the parish finances. A five-year program of renewal was introduced to the parish in 1998 leading to the celebration of our 75th anniversary in the year 2003. 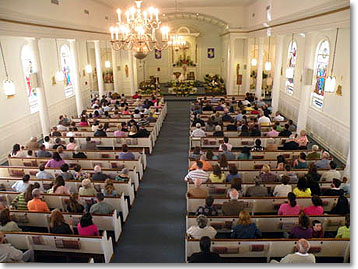 On June 25,2006, upon the retirement of Fr. LeDuc, Rev Richard Gendreau, already well known by many members of the parish community for his previous years of faithful service as an assistant pastor, returned to take on the title of 8th pastor and continue guiding the people in their faith journey of love and service to God. A new spirit of ownership of the parish has been taken on by our parishioners. A large number of programs have begun. On a more practical level, the church has been air conditioned.

We give thanks to all who continue to contribute to this wonderful history of a people of God. We pledge ourselves to continue following the Lord into whatever paths he chooses to call us. To Him we offer our history and our future as a song of praise.